NTBD: a step by step guide

Hi everyone! It’s me again, Fiorella and, with this post, I’d like to present my Master Thesis work for the M.Sc. in Mechatronic Engineering degree at Politecnico di Torino, “Development of a Standard Architecture to enable Fast Software Prototyping for Robot Arms”, and provide a step by step guide as clearly as possible (hopefully!) for using and re-using the developed architecture, called NTBD. In the first part I present the proposed architecture as you will find it browsing the github project. In the second post, instead, there will be a tutorial on how to use the architecture integrated with the chosen Open-Source robot arm, having a PC with Intel processor (or an ARM-processor host). Finally in the third article I’ll explain how to exploit NTBD using another manipulator different from the one I’ve presented, highlighting the limits.

Part I: an overview

The idea of my thesis came up noting that, when it comes to rapid prototyping, hardware has always has plenty valid choices, for example the Open-Source board Arduino and RaspBerry Pi; for what concerns Robotics, there are countless Open-Source projects for robot contruction, equipped with instructions, advices about the control hardware to be used, necessary pieces (which may be 3D printed) and BOM lists. For what regards the software, however, there isn’t a standard architecture upon which build your robotic application easily. Here comes into the picture NTBD, with the aim of developing robot arm applications.

NTBD: Name To Be Decided

Well, yes, here it is the so-longly-searched name in all its glory! After afternoon-sessions trying to find a cool and catchy name, that’s the result…

Anyway, I think that the most important part is content. Talking about content, I’ll now give a brief top-down overview of NTBD. 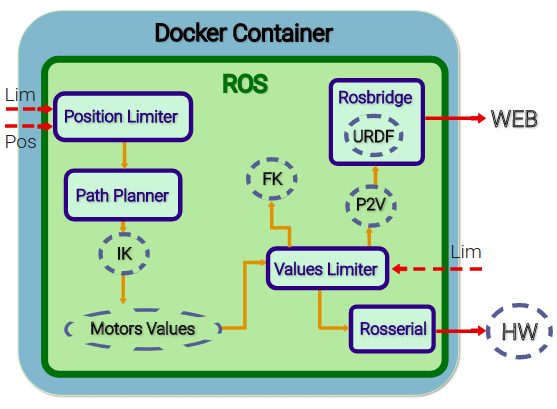 The following are the robot arm structure-independent components:

The architecture is portable thanks to its definition in a Docker container, which guarantees its execution always in the same way, with the only requirement of a Docker compliant system. Those who already have some basic knowledge of Docker, surely know that a Docker application is developed starting from a base image which usually is an Operating System image. In this case, the starting image is Ubuntu 16.04 with ROS Kinetic Kame (10th ROS distribution, 2016) installed on it, gathered from the HotBlack Robotics github. As can be seen from the NTBD repository onDocker Hub, there are two layers which make up the architecture, base and manipulator. The first one contains the architecture’s elements which are commont to all robotic arms (Position Limiter, Path Planner, Values Limiter, Rosserial e Rosbridge); upon this layer is built the second image in which the abstract components are implemented.

The components previously presented have been implemented in ROS, Robot Operating System, as Python nodes. I assume that the reader knows the basic dynamics of ROS framework, in order to avoid expatiating in further explanations and proceed to the listing and relative explanation of this architecture’s nodes and topics.

In the Figure we can see nodes and topics involved in NTBD dynamics. 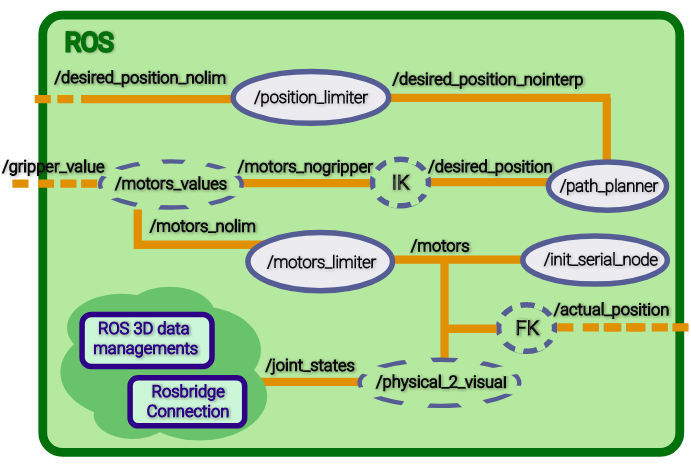 For what concerns the robot simulation on a web page, I had to make available in a server the robot arm URDF file and the HTML file for the application. The adopted solution consisted in bringing up a server, within the containerized environment, using nginx, an Open-Source web server which can be used to provide on the network HTTP contents. In order to display the simulation on the host machine browser, the port 80 of the container has been mapped to a host port of choice, e.g. 1234 (in the final versione, port 80 is mapped on the host standard port i.e. port 80). The nginx default root folder (/var/www/html) contains the HTML document, where the Rosbridge and ROS interactions happen and the where the URDF necessary for rendering is available. 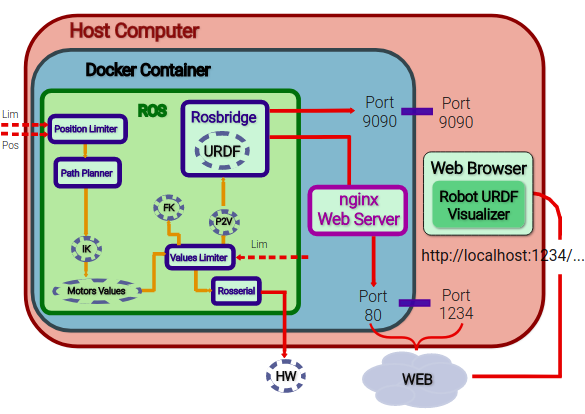 Going back to the ROS level description, the following are nodes and topics involved in the robot arm simulation:

From here on, the topic message management and nodes are the typical ones for ROS dealing with 3D data: the joint values are passed to the /robot_state_publisher topic, which gives in output messages of geometry_msgs/Transform type, exploiting the tf2 ROS package, that enables the user to track the coordinate systems in time. These information are then discoled to Rosbridge; since nodes and topics involved in this part are pretty standard, I won’t explain it further.

Connecting to “ourselves” from the browser, on the defined port, we can see the arm model moving together with the physical manipulator. The Rosbridge connection is initiated on the default port 9090 on which another computer can interact with the ROS system by publishing and subscribing on its topics.

In this article I will explain how to reproduce the project, complete of robot arm integrated to the NTBD architecture, introduced in post Part I.

Remark: This tutorial refers to the Docker Image for Intel hosts but also the ARM Image is available (can be deployed on Raspberry 3). To obtain the ARM version, when a command is required or a document is reffered to, it is sufficient to replace the word intel with rpi3.

The robot arm which I have chosed is EEZYbotARM MK2, an Italian Open-Source project by Carlo Franciscone, Design Engineer e Maker.

Following the instructions available on Thingiverse and Instructables for this project, I successfully completed the 3D printing and mounting of the manipulator. I have used the Cura software with parameters configured for a DeltaWASP printer.

For the DeltaWASP printer, download the following profile and load it on Cura following this guide.

Following are reported the most significant parameter for printing the neceassary pieces and to improve their definition:

This is the result: 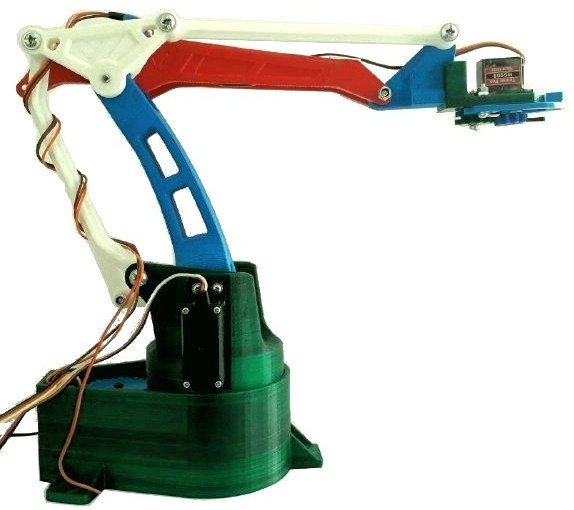 On the NTBD github page you can find the myServoControl_ntbd.ino sketch which has to be uploaded on the Arduino board. In my case I have used an Arduino Mega ADK 2560. 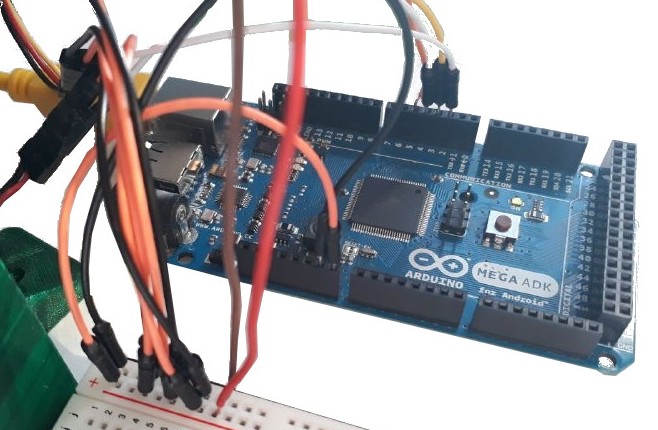 For Ubuntu use this link.

At this step, in order to download the NTBD images it is sufficient to execute the following command on the command line, so as to retrieve them from Docker Hub, using the docker pull command:

As you can see from the sketch, the servomotors, numbered as in Figure, are connected to the Arduino as reported in the table below.

To make all servomotors mode at the same time without overloading the board, connect it to the external power supply at 7.5 V/ 2 A.

To avoid overheating the micro-servo, connect its V+ to the 5V Arduino pin and its V- to a GND pin.

WARNING: always check that the ground is common to all components (Breadboard GND = Arduino GND ).

Connect the board and the Leap Motion controller to the PC via USB cable. 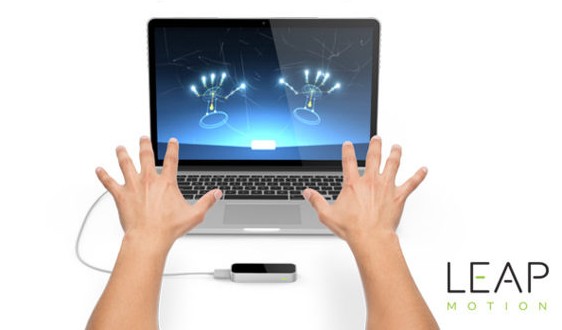 To correctly install the Leap Motion drivers for Ubuntu 16.04, follow this guide along with this slight edit.

Now that all external devices are connected, download the .yaml file for the ntbd-manipulator:intel image that is the one we are interested in. So as to boot the container (where the Web applications lie), you have to execute the following command within the folder in which the .yaml file is contained, exploiting the Docker Compose tool:

The combination of NTBD with the EEZYBOT arm controlled with ROS is what I have called siBOT.

Once the container has been run, open a browser page and connect to the loopback address, localhost, in order to connect to our computer: indeed the web application server is on our PC. Having called the HTML file “index.html”, by connecting to our IP address on the default port 80 (as expected, having mapped the container port 80 to the host port 80), the web address homepage will be indeed the WebApp NTBD-Visualizer, providing a link to the Leap Motion application. 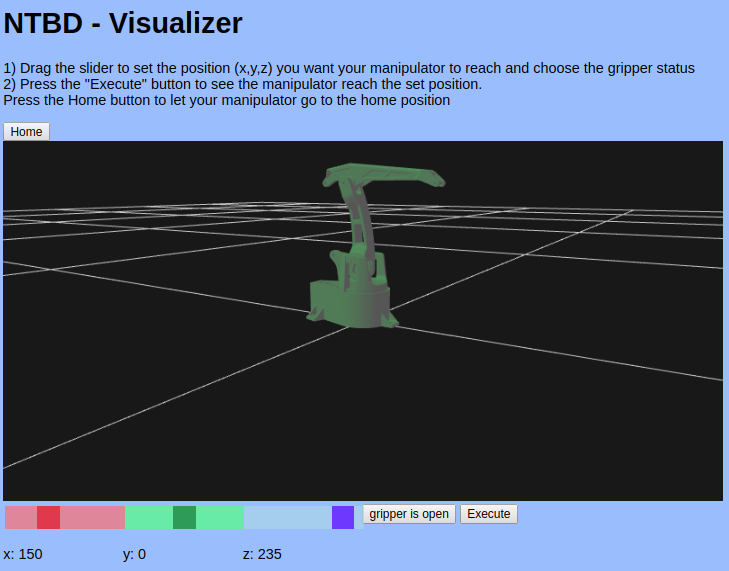 8. Play with the WebApps

Now you are provided with the simulation application from which you can impose a desired end effector position, moving the Cartesian coordinates sliders; clicking on the Execute button you will see the arm model moving together with the phisical arm.

Remark: the input values inserted by the user through the NTBD - Visualizer WebApp, are used to control both the simulation model and the physical arm.

If you want to try out the second developed application, just click on the “NTBD Leap Motion WebApp” link which will open a new web page. By keeping this window/tab selected, you can see that positioning your hand above the Leap Motion controller, the space positions are interpreted and sent to the physical robot that will emulate your hand movements. 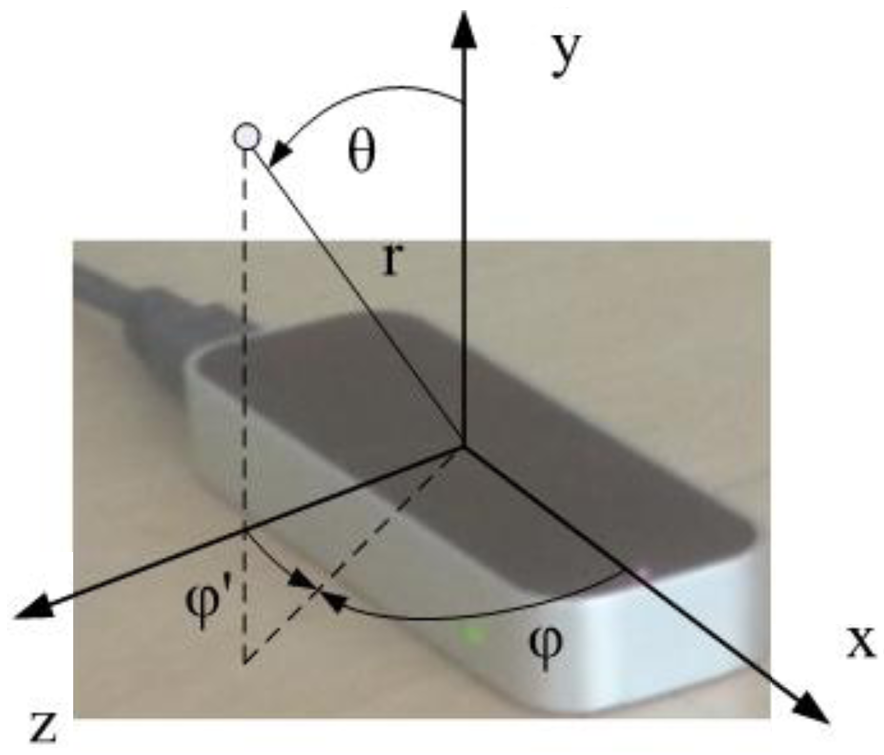 Part III: integration with other manipulators

In order to adapt the NTBD architecture to a another manipulator, different from EEZYBOT, it is necessary to re-define the architecture abstract components. Furthermore I assume that the control platform is an Arduino board. The abstract components are implemented in the ntbd_manipulator Docker Image and, as explained in post “Part I: an overview”, they depend on the chosen robot arm and thus require editing according to the new structure. Remarks:

It is necessary to download the NTBD project from github so as to edit the following files before proceeding with the build of the new ntbd_manipulator Image:

Once the necessary files have been mofidied, it’s time to build the new Docker Image. Enter into the NTBD_manipulator folder in which we have the Dockerfile.intel file, and execute the following command.

After connecting all external devices, run the container executing:

which exploits the Docker Compose tool with configuration specified in the docker-compose.intel.yml file.

When working with Docker, it is convenient, for the sake of organization, to use a Development Image and a Production Image. The latter is the final version of the Docker application, ready for release, whilst the former is used during the development phase. A common Image is built on which the Prod and Dev versions are generated and, with some tricks, it is possibile to harness the *caching * mechanism provided during the building stage. Indeed, if the edited files are still in debug phase, at each Image build, the layers (even if previously built up) will be re-built. 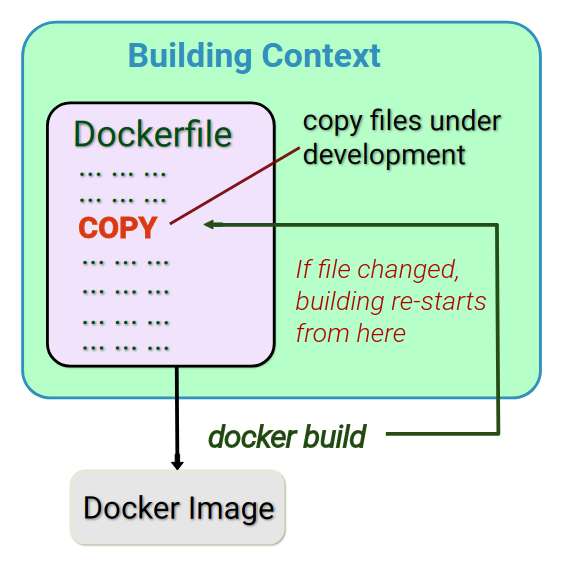 It is thus suggested to have all files still in dev stage in a single folder, shared among the host system and the container: through a bash script, executed at boot time in the container, the files are copied into the container. This clearly increases the boot time but also avoids the re-building issue. The Prod Image, which for NTBD is the one provided on Docker Hub, copies the definitive files from the building context (the folder containing all necessary resources for the container execution) to the container file system, since now all files should be at their final version.

The following is a building context example:

Here I provide the NTBD_devel_entrypoint.sh bash file content, used for my development version: